Assisi Loop® technologies offer all animals a safe pain management technology that can be used as a stand-alone therapy or in conjunction with your veterinarian’s prescribed treatment plan. Assisi Loop technologies are portable, easy-to-use, prescription only, non-pharmaceutical anti-inflammatory tPEMF™ device that allows pet owners to continue the healing at home and take a proactive role in their pet’s recovery. Essentially, tPEMF can be used to speed healing, reduce inflammation, and lower pain levels. The field penetrates fur, bandages, and casts to reach all tissue in the target area. These benefits all make Assisi Loop technologies a great tool for your pet’s hard and soft tissue injuries, surgery, or pain from inflammation.

This simple law from physics allows currents to be induced in tissue from outside the body, without anything touching the skin. Magnetic fields penetrate through bandages, casts, fur, hair, etc. The simple induction of electrical current in tissue is the functional therapeutic component of Assisi’s tPEMF technology. It is the effects of this induced current that are therapeutic.

Historically, PEMF technologies were generally large, AC-powered devices that produced a substantial magnetic field. Even today, manufacturers of some PEMF devices describe them as “powerful” or “more powerful.” During much of this period of development, PEMF devices did not have a specific or known biological target. Developing medical applications of the technology was largely driven by trial and error based on unproven assumptions that greater power was likely to produce better outcomes.

We now know those assumptions to be incorrect. By the 1970s, researchers and clinicians had developed relatively low-powered PEMF devices—bone growth stimulators (BGS)—to heal recalcitrant fractures. Although demonstrated to be effective at fracture repair at low power, the specific mechanism of action remained elusive.

Arthur A. Pilla, one of the inventors of BGS technology and a professor of Biomedical Engineering at Columbia University, was also the original developer of Assisi’s targeted PEMF products. He focused significant time and resources on researching mechanisms of action for PEMF and developing PEMF signals. Among the potential targets proposed in the literature, research suggested that calcium binding was a likely candidate, in particular, the binding of calcium (Ca) to calmodulin (CaM). This particular complex is a voltage-dependent process responsible for a number of potentially therapeutic biological cascades, most importantly the natural anti-inflammatory cascade. Learn more about the science behind the technology here. 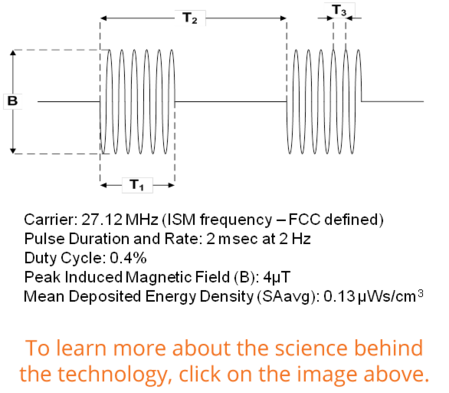 The Ca/CaM anti-inflammatory cascade is well-described. The initial binding of four calcium ions to calmodulin produces a conformational change in CaM, which, in turn, then binds to the constitutive nitric oxide syntheses (both endothelial – eNOS and neuronal – nNOS), which virtually immediately (within seconds) leads to the production of nitric oxide (NO), a principal anti-inflammatory molecule. Nitric oxide reduces pain, improves blood flow, and reduces edema. It further triggers downstream effects, including the production of cGMP, the ‘energy’ molecule that then drives growth factor production, which, in turn, supports new blood vessel formation, tissue regeneration, and then, ultimately, tissue remodeling.

What this means is that Assisi can bring the most effective targeted PEMF technology to veterinary medicine in small, lightweight, and disposable configurations whose effectiveness is supported by a substantial and growing body of basic science and clinical research.

This two-year clinical trial was conducted at North Carolina State University’s College of Veterinary Medicine. The study was conducted under the direction of Dr. Natasha Olby, VetMB, Ph.D., MRCVS, DACVIM, a specialist in Neurology.

The study employed the Assisi Loop as part of a pre-to-postoperative treatment regimen to reduce pain and hasten recovery.

The Assisi Loop PEMF device has been cleared by the FDA for prescription use in humans. To our knowledge, this clinical study is the first published double-blind, placebo-controlled, randomized study of such a device to demonstrate clinical efficacy in the practice of veterinary medicine. This tightly controlled study demonstrates that the Loop’s healing and pain relief benefits found in humans also extends to animal healthcare. The complete article on the study and its results will be published in the Journal of Neurotrauma; the abstract of the trial report may be found here.

Dr. Deirdre Chiaramonte DVM ACVIM CCRT CERP CVA, Assisi’s Manager of Clinical Studies, commented: “This is the first university study to demonstrate a positive clinical benefit of an NPAID in the treatment of postoperative Grade V IVDD. The results of this study show undeniably the Loop’s ability not only to reduce pain in a severe population but also to help target neural tissue to recover faster. This speeds the patient’s ability to return to more normal function more quickly and suggests that using the Loop should be considered as ‘best practice’ in surgery and rehab cases, both in hospital and as a take-home therapy.”

A basic summary of the main conclusions from the Loop IVDD Study is as follows:

-There was a statistically significant difference in the incisional pain level between Loop-treated and placebo patient groups. This pain benefit in the Loop-treated group got larger (more significant) the longer time went on.

-The Loop-treated group had a statistically greater degree of recovery of proprioception compared to the control group. This may be evidence of the neuroprotective effects of the Loop.

Cashmere Veterinary Clinic would be happy to discuss the use of Assisi Loops as a pain management, wound healing, anti-inflammatory, and post-surgical healing option. Please call and schedule an appointment.