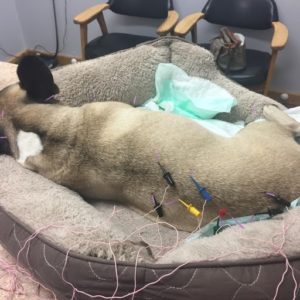 Fiona’s Story: A story of paralysis, acupuncture and rehabilitation.

I first met Fiona earlier this month. It was right before the 4th of July celebrations, though Fiona’s owners didn’t have much to celebrate. Fiona is a sweet-spirited, gentle French Bulldog filled with energy and playfulness. At three-years-old, she still has puppy-like qualities that she exhibits with her spunk and active life-style. I knew these things because her owners told me stories. I also knew because I could see in her beautiful eyes that she wanted to be up and jumping around, but when Fiona came to me she could not jump or play because she was paralyzed and unable to move her back legs.

Before Fiona came to me, she had been experiencing progressive rear limb paralysis over the previous weeks. The initial recommendations for care given to her owners were medical management with steroids, or surgery. The tentative diagnosis was Intervertebral Disc Disease (IVDD), a condition where the discs between vertebras of the spine bulge or rupture causing inflammation and damage to the spinal cord. Referral to a veterinarian neurologist for MRI and possible surgery is gold standard for care, but in Fiona’s case this was not an option. There had to be another option—Fiona’s owners were desperate to find care for their paralyzed dog. And that’s when Fiona’s owners found me.

Mary Ellen is Fiona’s owner/mom. She came to me hoping that acupuncture might provide some relief and healing for Fiona’s paralysis. Acupuncture is a form of medicine that has been used to treat humans and animals for over 2,000 years and involves stimulating certain points on the body with the use of needles with the goal of alleviating pain and inflammation. Recent research has shown that these points are located over areas with large supplies of nerve bundles, blood vessels and lymphatic vessels. By stimulating these points, the body releases endogenous opioids and neurotransmitters that help to clear inflammation, treat pain, and stimulate the immune system.

When Fiona arrived that day, I feared she had been paralyzed for too long—the complete lack of movement from her rear legs may have been an indication that she was too far gone. After I shared my concerns with Fiona’s family, we agreed to perform electroacupuncture and laser therapy on Fiona. I placed needles and then used an electro-unit that is specifically made to send an electrical current between the points of acupuncture needles. This strengthens the affects of the acupuncture, and helps to clear inflammation and reduce pain more significantly than dry needles alone. The results were nothing short of miraculous. Fiona started standing after the first treatment. After the second, she was walking. By the third, she was neurologically impaired in only one foot. As I write this article, Fiona is still recovering, but I can safely say, she is recovering well.

I tell people that acupuncture is neither voodoo or magic. There is science-based evidence behind this therapy. And there are times where is doesn’t work—I’ve been there. But it worked for Fiona. And it could work for your dog, cat or horse too.